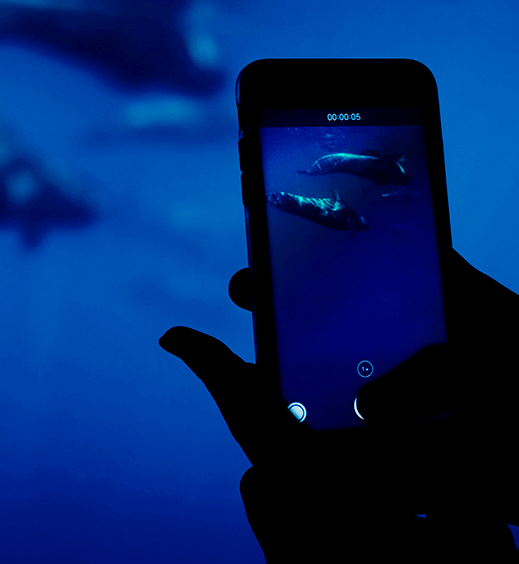 Of the 79 species of cetaceans existing in the entire world, 19 of them have been seen in the waters of Tenerife, where there is a stable colony of pilot whales (Globicephala macrorhynchus) made up of approximately 250 members. These animals, which are sociable and quite used to human presence, are concentrated in the narrow strait that separates the southern coast of Tenerife from the neighboring island of La Gomera, and their sighting is possible at any time of the year.

The Canary Islands are located in the waters of the subtropical West African region and of volcanic origin (which implies great water depths not very far off the coast). They present some unique oceanographic and geomorphological characteristics that allow for the existence of topical-water wildlife alongside fauna more inherent to be found in temperate and cold waters. The islands mark the southern boundary for cold-water species and the northern limit for species of tropical waters. At present, at least 29 species of cetaceans belonging to 8 families have been identified, although there have been sightings that have not yet been confirmed of three other species. This set of species makes the Islands one of the places in the world with the greatest diversity in terms of cetaceans, and the largest cetacean zone in Europe.

The reason why we can find these stable colonies of cetaceans in our waters throughout the year is especially due to three factors:

Calm waters, an average water temperature that ranges between 18 and 20 degrees Celsius and a water depth which averages 1,500 meters between the islands of Tenerife and La Gomera and whose maximum depth is approximately 2,400 meters.

All of these factors make these waters very rich in organic matter, fish, and -especially- squid and other cephalopods, also being able to find specimens of giant squid, which is the favourite food of the sperm whale (Physeter macrocephalus). The abundance of food, combined with the factors previously described, allows pilot whales (Globicephala macrorhynchus) and bottlenose dolphins (Tursiops truncatus) to live in our waters throughout the year, and for many years. In addition to these two species, which are commonly seen in these waters, we can also find some of the following specimens with a good amount of frequency:

The sperm whale (Physeter macrocephalus); the false killer whale (Pseudorca crassidens); the tropical whale (Balaenoptera edeni); the common dolphin (Delphinus delphis), smaller than the bottlenose dolphin; the striped dolphin (Stenella corevalba), very easy to recognize because of its beautiful, dark, longitudinal lines; the rough-toothed dolphin (Steno bredanensis); Risso's dolphin (Grampus grislus); the bottlenose dolphin (Tursiops truncatus); the spotted dolphin (Stenella frontalis), of a size similar to the common dolphin but with a colour similar to the bottlenose when it is young. And, on some occasions, the blue whale (Balaenoptera musculus), the beaked whale (various species), and the killer whale (Orcinus orca) - up to a total of 26 species. 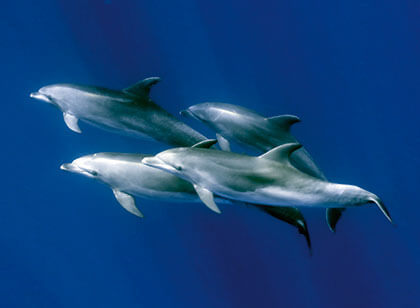 Size: The average size of adults is 2.7 meters for males and 2.5 or 2.6 meters for females. Older specimens exceed three meters, with a maximum of 3.4 meters having been recorded on the Canary Islands. This species can live up to 30 years and weigh more than 500 kg.
Sightings: The bottlenose dolphin is a common species in the island chain that we can find relatively near the coast and, in reality, it can be observed within 2 miles of the coast all year round at the south-western part of Tenerife. In the spring and especially in the summer, the population increases with the arrival of other groups. Tenerife's south-western waters seem to be one of the largest breeding grounds for this species in Europe. 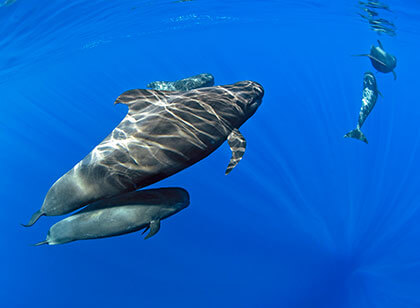 The pilot whale is a member of the genus Globicephala. These whales can live from 30-50 years, weigh an average of 3 tons and are found in groups that range between 5 and 50 individuals. They are located in tropical or temperate waters.
They have a dorsal fin that is fatty in nature, low, has a very elongated base, and is situated approximately at the centre of their body. Their pectoral fins, in even numbers, are large, have thin edges, and slope backwards; and their caudal (tail) fin is split into two lobes and horizontal in nature - something unlike the caudal fin of fish, which is vertical. Their colour is a shiny black and they have a lighter streak that runs from their throat to below their belly. They can reach up to 7 meters in length. 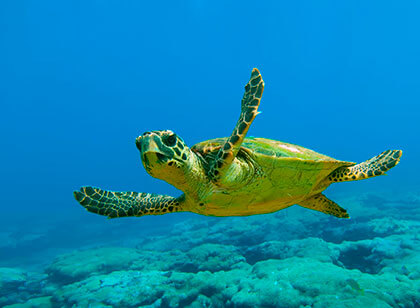 Throughout our journey, in these waters we may come across sea turtles on the water’s surface. These animals are endangered. The sea turtle species which can be found are: The Loggerhead Turtle, the Green Turtle, the Hawksbill Turtle, and the Leatherback Turtle. 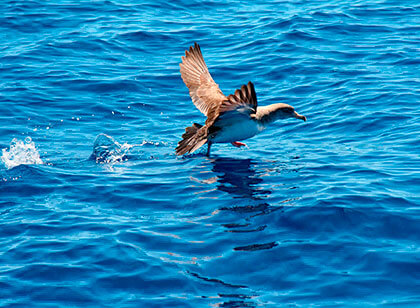 During our voyage, we may come across a wide variety of birds, amongst which the following species are noteworthy: Scopoli's Shearwater, the Common Tern, the Common Yellow-Legged Gull, and the Osprey, which is known on the Canary Islands as the "guincho" and included as a Vulnerable Species in the Spanish Catalogue of Threatened Species and the Canary Island Catalogue of Protected Species. This animal’s seasonal habitat is at the Los Gigantes Cliffs.

Part of the zone where the whales and dolphins are located is included in a protected area known as the Teno-Rasca Marine Strip Special Area of Conservation, which occupies a marine area of 76,648 ha, reaching a distance of 12 nautical miles from the coast at its farthest point and having a maximum depth of approximately 2,000 meters in the south-western region. The section of land next to the Special Area of Conservation is delimited by the Teno Massif and the Los Gigantes Cliffs (a Rural Park) to the north, and the volcanic landscape Punta Rasca (Special Nature Reserve) to the south. All of this covers a coastal length of 80 km. 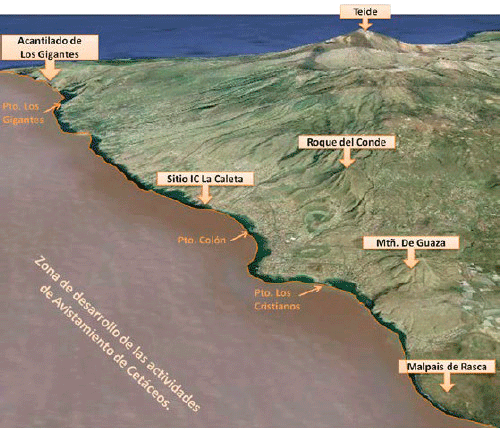 The areas where dolphin and whale watching activities are normally carried out off the coast of the Island of Tenerife offer a privileged view of the different land resources that are available and which have a very high geological, natural, and cultural value. Of said resources, noteworthy are: Mount Teide, Roque del Conde (Barranco del Infierno Special Nature Reserve), The La Caleta Site of Scientific Interest, Diego Hernández Beach, The Los Gigantes Cliffs, The Rasca Badlands Nature Reserve, Guaza Mountain, and many others.